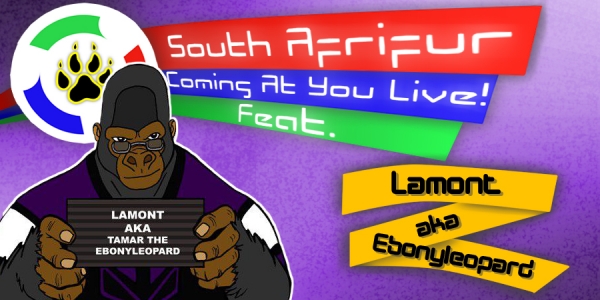 This Sunday: Lamont aka Ebony Leopard

This Sunday we have the privilege of speaking to Ebony!

Shawntae Howard AKA Tamar the Ebonyleopard as well as Lamont the Ebony Gorilla, EL, or just Ebony for short. First became aware of the Furry Fandom in 1995 and went to his first furry convention in 1996 at Cleveland, Ohio’s Confurence East where he met furry comic writers and publishers Mike and Carole Curtis and was given his first illustrating job for their book New Horizons. The following year he would be offered the lead pencil job on, then, Vision Comics’ Katmandu starting with issue number 10, which he would do for the next 14 issues.

In 1999, Vision Comics offered to publish his own book, Extinctioners, which he’s been working on ever since. He has been an active participant as an illustrator and comic writer in the fandom for 22 years now. He's also been the guest of honor of 3 furry conventions C-ACE 2002 (Ottawa, Canada), Western Pennsylvania Furry Weekend 2006, and Morphicon 2013.

So join us this Sunday for Ivic Wulfe, Scratch and Ebony Leopard/Lamont at 8pm CAT/ 7pm CET, 6pm GMT and from East Coast to West Coast America between 1pm EDT and 10am PDT

More in this category: Previous South Afrifur Con Update! Next This Sunday: Jake Bunny!
back to top