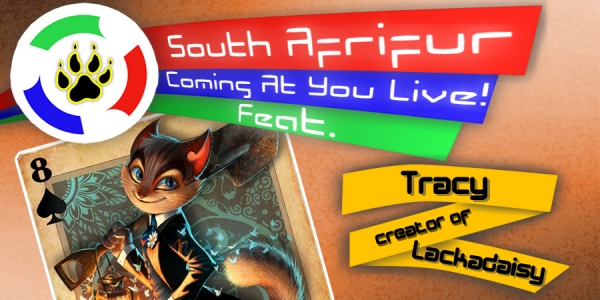 This Sunday we have a special guest in Tracy J. Butler Creator of Lackadaisy!

Tracy Butler is the creator of the Eisner nominated web and print comic, Lackadaisy - the story of a shady gang of scofflaws trying to run a 1920s, Prohibition era speakeasy and doing a spectacularly bad job of it.

Coming off a long stint as an artist in the game industry, Tracy has transitioned to working full-time on her comic. She’s situated in St. Louis where she lives with a clowder of cats, participates in a lot of feral cat rescue and TNR, and spends most of her time drawing and writing about...well, cats.

Her work can be found at http://Lackadaisy.com , with a supplementary blog at http://lackadaisycats.tumblr.com and lots of extra for supporters at http://patreon.com/Lackadaisy

So join us this Sunday for Ivic Wulfe, Scratch and Tracy J Butler at 8pm CAT 8pm CET, 6pm GMT and from East Coast to West Coast America between 2pm EDT and 11am PDT

More in this category: Zurück This Sunday: Bill Kieffer Weiter Interview with Mickey Bamboo this Sunday: 17/06/2018
back to top